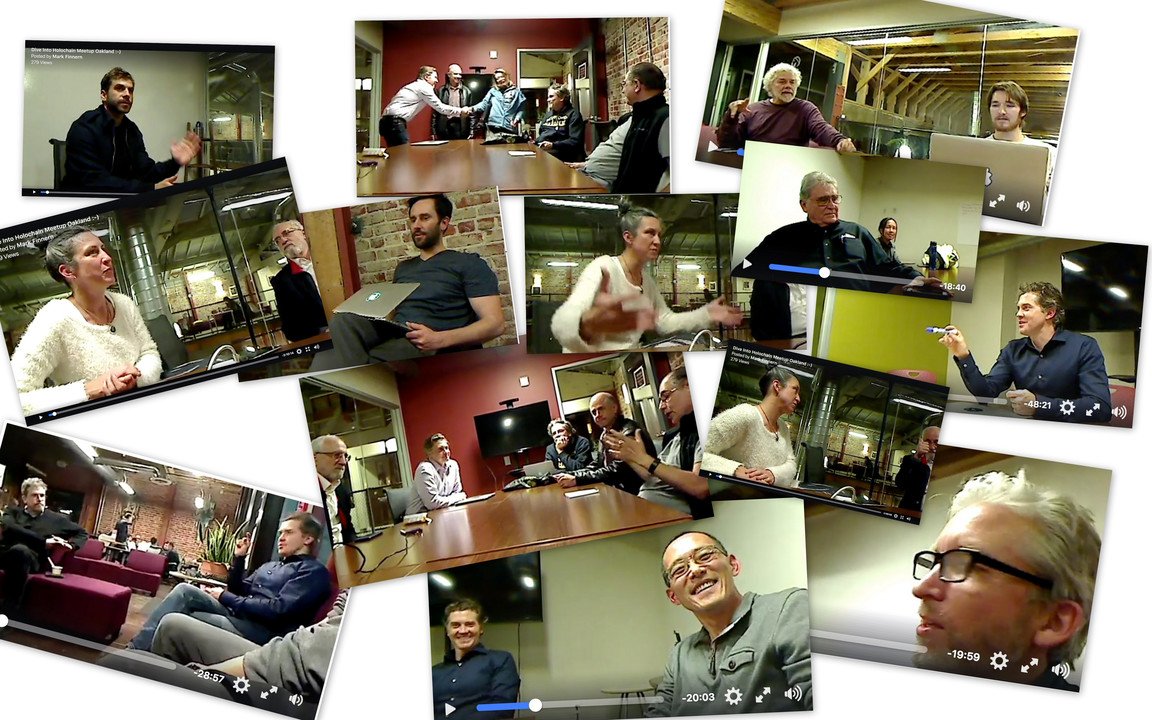 From the beginning of the Thrivable Future Salon one of our goals was to look at larger trends and do what we can to nudge these trends towards a positive future that works for all.

If you are in the Bay Area this week, join me for the Dive Into Holochain Meetup this Wednesday 31st of January 2018 6pm at the Mozilla headquarters in San Francisco. Further down I describe why I think this is an enormous opportunity for positive change.

Over the years at the Thrivable Future Salon we have been introduced to all kinds of concepts and underlying principles that influence and guide our lives.

Howard Rheingold, in one of the very first ones, introduced us to Smart Mobs. Boy, are their darker incarnations alive right now on our centralized social networks.

One of the most impressive Future Salons was the one with Doug Engelbart[video]. He is the inventor of modern computing and talked about the principles that lead him to create it.

Early on in his life he came to the following powerful goal:

Let me design a professional goal which will maximize the contribution my career can have to mankind!

As much as possible, to boost mankind’s collective capability for coping with complex, urgent problems.

In 2013 I participated in a Meta-Currency Collabathon in New Jersey organized by Art Brock and team. The concepts they expressed blew my mind, as they were looking at wealth from a much more holistic, all-encompassing perspective. My contribution to that event was to record an interview with Art to go over these ideas. It really expanded my thinking.

Cryptocurrencies built on Blockchain is one amazing opportunity to nudge our future towards thrivability. Alas, just thinking about the waste of energy, as Bitcoin alone is using more energy than the whole of Ireland. If at least they would do some protein folding with all that computer processing, but no, the network crowns a winner and throws out all the rest of the computation.

Can we at least run some serious transaction volume using blockchain? Well, not really. You need consensus on the whole network, which by its definition limits the number of transactions possible, in case of Bitcoin it currently is 6–7 per second. Recently the little CryptoKitty game of buying and selling some cute virtual animals majorly slowed down the Ethereum network.

There has to be a better way.

Holochain to the rescue:

Holochain  enables a distributed web with user autonomy built directly into its architecture and protocols.

Holochain has this enormous potential to create the underlying foundation for a massively positive thriving world.

What can you do to help birth this thriving world?

Think about which problems would nicely be solved by a fully distributed system on Holochain and create that solution.

It is a lot to wrap your head around, but once you understand the underlying architecture, it becomes clear that this has the potential to solve a lot of our current problems.

More about the whole Holochain/Holo platform in this excellent Crypto Disrupted interview: