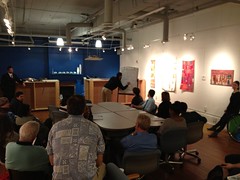 Just came back from the energizing brainstorming session around creating a Maker/Hacker space in Savannah. Another great event organized by Jake and his team of the Creative Coast. Thanks.

The energy in the room was high and the wish list got longer and longer.

The audience was diverse from teenagers to retirees with sparkle in their eyes eager to tinker and try out new things.

The 30K question is, will there be enough people that understand the benefit and shell out the monthly fee to make if thrive and be self-funding?

I am convinced it will be, if we ensure the following:

A couple of trends will ensure the success of this space in the long run:

One group that could greatly benefit from such a space are high school kids. They will learn so much about how to get from an idea to a finished prototype that they may not even need to go to college. After tinkering for a couple of years in a Maker Space they would be prime candidates for Peter Thiel’s 100K fund that payes high school kids to develop their ideas instead of going to college.

Membership in a Maker space would be high on my Christmas present list if I were a teenager and smart parents will line up to give them that opportunity as it is the key for future prosperity.